A black cloth falls over the monuments of Italian UNESCO Sites as a sign of mourning for the destruction of cultural and historical heritage in the Middle East.

The City of Venice, representative authority of the World Heritage Site “Venice and its Lagoon”, together with the UNESCO World Heritage Italian Goods Association, supports #Unite4Heritage, launched by UNESCO to denounce the destruction of cultural and historical assets in the Middle East, many of which are included in the World Heritage List. 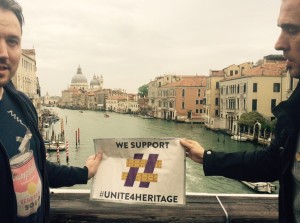 #Unite4Heritage was conceived as a sign of mourning for civilian victims and of scorn by the international community faced with the unlawful destruction of the heritage that represents the cultural identity of a whole community.

What is currently happening in Iraq has generated so much indignation that UNESCO Director General Irina Bokova has taken the case to the International Court of Justice in The Hague, after the destruction of archaeological artefacts in Mosul, Iraq, condemning the devastation of a cultural and artistic heritage as a war crime.

We should all work together to ensure the preservation, awareness and transmission of the natural and cultural world heritage to future generations (Convention on the Protection of World Heritage -1972).

Take a picture of the UNESCO Site “Venice and its Lagoon” and explain why it is so important to you.

Cancel reply
Next Post
Realized by EasyGov
Back to Top